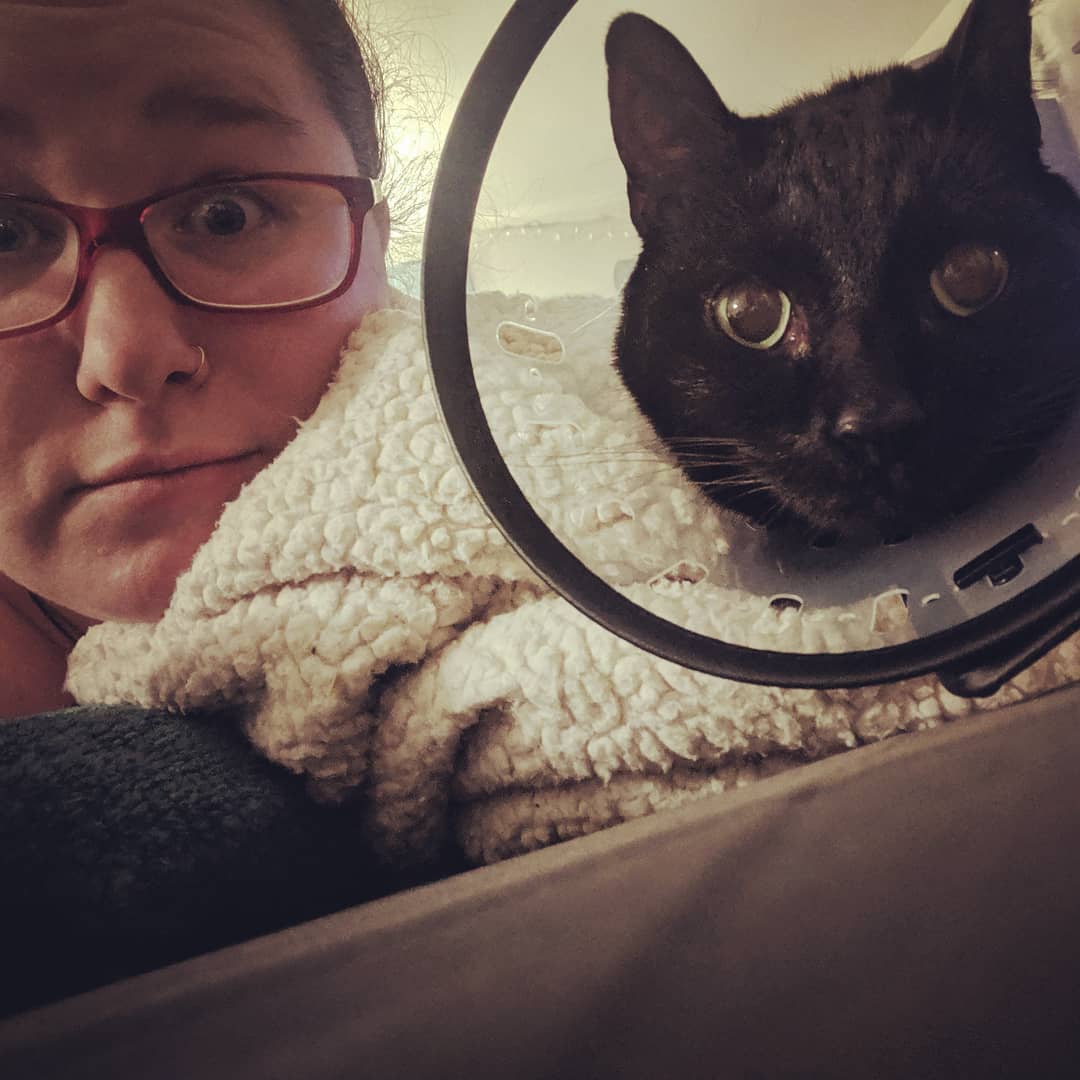 In early August, I wrote a blog post discussing my daughter‘s kitty, Bellatrix (AKA: Belly), and her fight with cancer.  I ran a fundraiser to assist with steep costs associated with the treatments she was going through and would be facing.  Some of this blog’s wonderful readers supported that fundraiser and/or the Go Fund Me fundraiser.  Again, thank you all for your love and support!  Now to catch you up to where Belly is today. 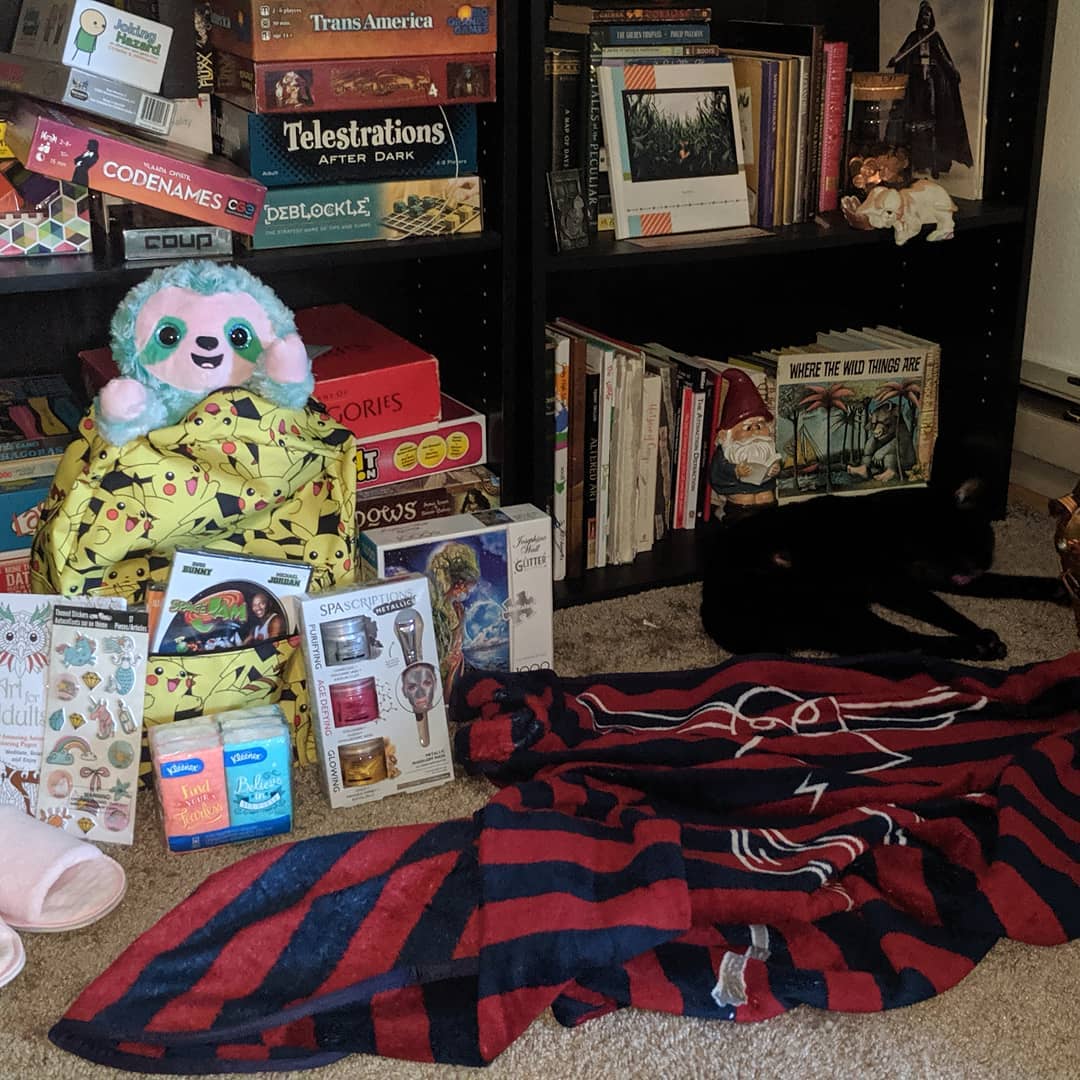 Shortly following the original blog post, Catey and her husband went out for the evening. When they got home, Belly was hiding in the office, breathing very shallowly, and her paws and ears were hot. They took her into the bedroom with the AC on for an hour. After cooling off she seemed to bounce back to normal, but then the following morning she was showing the same symptoms as she was the night before. Catey took her to the vet that morning and she was put on some pain meds and given an antibiotic shot. The vet was hopeful that Belly’s behaviors were from an infection due to the traumatized tumor site, but also concerned that if Belly’s breathing continued to stay shallow, it was possible that the cancer had spread to her lungs. If so, the only option remaining would be to make her comfortable as long as possible. 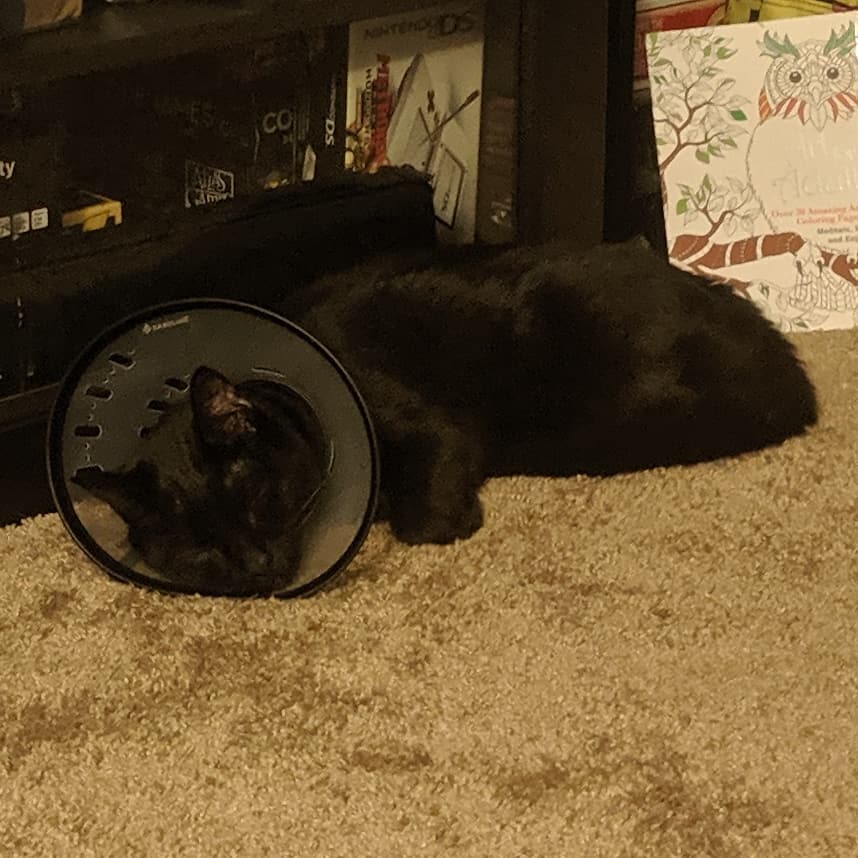 Catey and her husband were fortunate enough to take a much-needed vacation. Following their return, they found that Belly’s bump looked to be deflated, with some weird kind-of-hole leaking milky liquid into her fur.  [I’ll spare you the photo here.]  So they turned to Google to get an idea of they were looking at, and then called the vet to ask for advice. It was right before closing, so Catey emailed photos to the vet and received the following response:

Catey and her husband were frustrated that seemingly over half of Belly’s mass was a cystic pocket, that ostensibly could have been drained to relieve pressure instead of allowing it to rupture on its own. They were also cautiously optimistic, because now her bump was significantly smaller. This could mean a surgery might be less invasive or drastic – maybe even no limb amputation.

The day before Belly’s surgical consult, Catey was hoping for good news, or at least answers.  The cystic pocket of the mass on her hip was still draining some fluid, and late the previous night the fluid was slightly tinged with blood. This was likely because Belly is devilishly smart and had figured out how to lick near the mass despite the cone, which was incredibly frustrating and also a tiny bit hilarious – the contortion she has to make in order to twist her butt into the cone was very funny to see.

The shot of antibiotics she’d received at her last visit to the vet was about to wear off, so they were trying to be extra vigilant for signs of her not feeling well. She continued to eat, drink, meow, and sleep normally for the most part, and the occasional concerning symptoms were usually a product of Catey’s helicoptering and tended to disappear quickly.

Belly wearing her cone, sitting on a blanket with her favorite stuffed caterpillar, staring at the birds outside.

When they first got Belly’s diagnosis, the vet led them to believe the mass was entirely a tumor. With the apparent cystic pocket rupturing and reducing the size of the mass considerably, they were very hopeful that limb amputation will not be necessary. That said, Belly still had a result of cancerous cells from cytology. That meant that at least some portion of the mass was a tumor and would need to be removed. The consult was going to be an hour long and the time would be spent determining if she was eligible for surgery, and if it would be affordable enough for them to pursue.

Belly’s cancer was diagnosed as a vaccine-caused soft-tissue sarcoma – which is something that can happen in 1 in 10,000 cats. The mass was very large and Belly is a small kitty. Amputation of her right rear leg and a portion of her abdominal muscle was deemed to be necessary to remove the tumor with good margins. The required testing and surgery was estimated to cost between $4K and $7.5K, which was very much out of their price range.  If they could not afford the surgery, they would have to continue to manage her infections and pain at home until her quality of life deteriorates. The vet did not give a very good prognosis if they did not move forward with surgery.

Because small town clinics tend to be cheaper than city clinics, Catey made an appointment for Belly to meet with another surgeon. The visit would only cost $45, compared to the $155 it cost to meet with the first surgeon. Catey and her husband were cautiously optimistic that the quote for surgery would be lower too.

If the second quote was still not in their price range, then they would simply be unable to afford the surgery. That is, assuming Belly would even be eligible for surgery; standard procedure would be to stage her first, meaning several tests in order to determine how extensive the mass was and whether it had metastised.

If they were unable to pursue the amputation for any reason, then their only remaining option would be to manage her infections and pain at home until her quality of life deteriorated. The vet intimated that they would see a decline within weeks.

In response to the growth of the tumor, Belly had become suddenly ravenous. She was eating significantly more per day than usual. That said, she continued to act fairly normally.  She was talkative and snuggly and, in supervised moments, she got to roam cone-free.

Catey took Belly to a smaller town vet to get a second opinion/quote for the amputation that Belly needed to be cancer free. That appointment was their end of the line; if the surgeon couldn’t have done the surgery or couldn’t give them an affordable quote, then they were going to have to plan end of life care for Belly.

At this appointment, they we were quoted between $950 and $1170!  They began blood work that day and scheduled x-rays and surgery for Belly less than a week later. Catey was joyous that she would have a tripod cat who was cancer free and had many years ahead of her in just a few days.

At that point, with the help of family, friends, and some strangers, they’d been able to keep Belly on antibiotics, give her pain meds, and seek additional options without having to deplete their savings account. 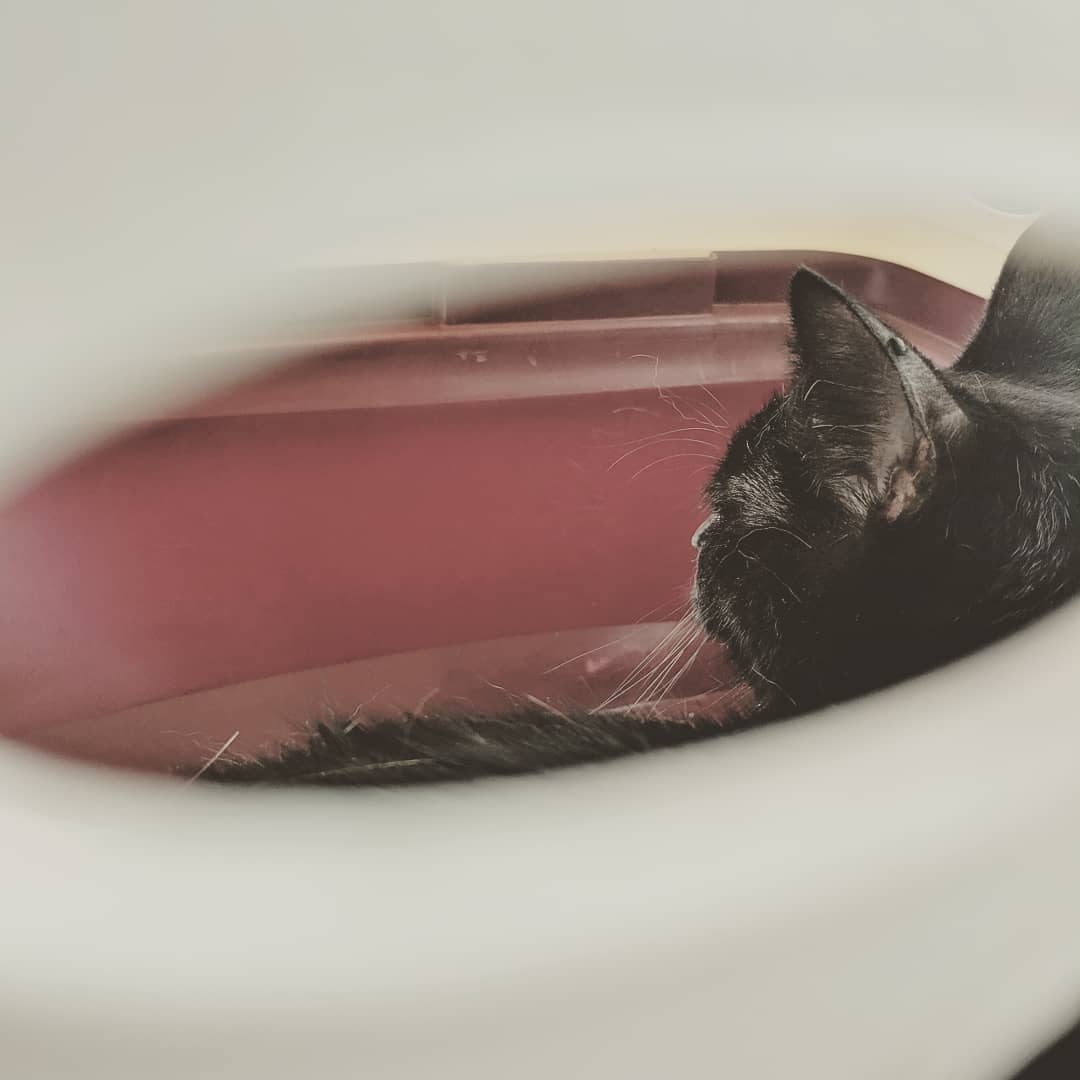 The day of the surgery, the devastating news that Belly’s cancer had spread to her lymph nodes and her lungs was delivered. She also was diagnosed with hyperthyroidism. They were now past the point of no return and could only provide palliative care until it was time to let her go.

The vet gave them days, maybe weeks before she began to deteriorate. The unknown was the hardest part. She wasn’t ready to go just yet – several people have said that they will know when it’s time, and so will she.  When the time comes, they are planning on having a service come to them and have it happen at home, with a private cremation afterward so that they can have her ashes. Our society has a weird relationship with death and grief, but having the death and after-death plan helps Catey feel a little better. In the meantime, they are keeping her comfortable and giving her a lot of attention and food – her favorite things besides moving the poop around the litter box.  We’ll never understand that habit.

Belly and Catey both slept a lot after receiving the bad news the previous day.  Belly was a pro at taking her pain meds and her hyperthyroidism medication.  She was pretty self-conscious about her shaved belly.  Much to her chagrin, Catey loved patting it and if she thought she could get away with it, she’d kiss it too. Belly was eating and drinking water, obsessively rearranging the litter box after her little sister, Tana, rudely destroyed it, and spent time near Catey.  Catey spent all of her time near Belly. 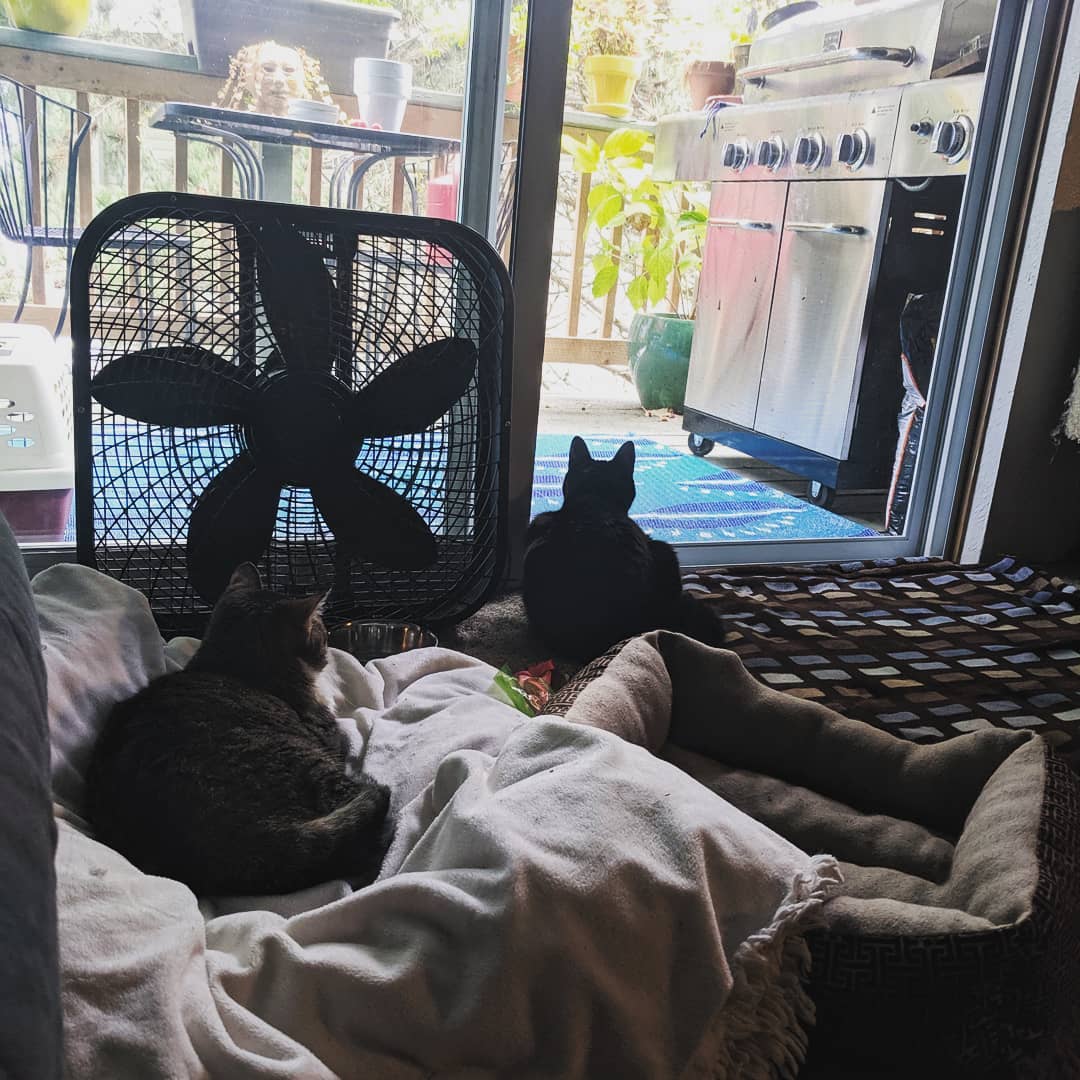 The rainy weather is their favorite.  They laid a lot of blankets around for the cats to lay on.  Despite the blankets each having enough space for both to sit, the cats insisted on having their own. They also both wanted to watch the birds come visit during a brief break between rain spells. So here they are, on their own blankets, hanging out together-but-not-together.

Over the next week, Belly had been taking her hyperthyroidism medication well, and she was on “every 2-3 days as-needed” basis with her pain medication.  She’d been very playful, had done a lot of bird watching, and once aggressively stared down a squirrel that popped onto their balcony to look for treats.  Catey even caught her up on the kitchen counter for the first time in weeks, attempting to break into the butter dish.

Since discovering the tumor, Catey has spent most nights sleeping on the futon in the living room. Belly didn’t often climb up to cuddle with her, but she did seem to prefer her presence.  Catey keeps trying to let Belly sleep without her being stared at.

Belly’s health continued to deteriorate, which was expected. A third round of antibiotics was not advisable. Now that the antibiotics in her system have worn out, they are seeing the infection at her tumor site begin to take over. She is still a very happy kitty – her pain medication is very helpful, as is the hyperthyroidism medication that allows her metabolism to slow down. She’s been very playful and curious, even jumping up on things like she used to. She’s also incredibly demanding of attention from everyone who has visited. This is how they want her to go.  They want her to be happy, and loved, and not noticing the cancer and its side effects. This is why they have decided to make an appointment with a vet to come to their home on Saturday afternoon and perform the euthanasia service. They were given days, maybe weeks – and it’s been a blessing to get three weeks of time with Belly.  They’ll enjoy this last week with her and then they will let her go.

We all wish to extend our gratitude for all of the love in every form imaginable that has been extended throughout this journey.